I would argue that hospice and homelessness fall into similar catagories. In both there is only the hope of further illness and death.

Those of us who find ourselves in luckier circumstance might consider quality of life an issue to be tackled as well as its right.
Posted by Joe S. at 9:50 AM No comments:

Everything and nothing changes

I see the sun coming up. I'm thinking of the warmer, less strenuous, days for the homeless. But their plight does not go away with the snow. They will still be in the shadows, hidden from our sight by our city planners and legislators.

Only we, as individuals, can know and help "the poor". They have names like "Mike" and "Larry". And faces like any other person living life with the hand that is dealt them.

This Lent I want to give change to the poor. And the change will be in me.
Posted by Joe S. at 5:17 AM No comments:

Change for a Dollar

From one of my dear Facebook friends... reminding me that it takes so little to do so much.
Posted by Joe S. at 5:15 AM No comments:

The Face of Poverty In The US.

15 percent of Americans live in poverty, the highest of any industrialized nation in the world.

How can we say it is not our problem? Christians how can we say, "The Lord bless you." and not give a blanket, a couch, or a damn? 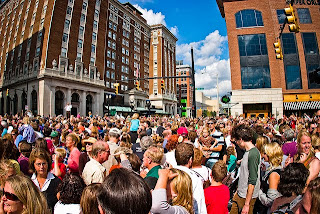 The Census Bureau opened its press briefing on the just-released 2010 income, poverty and health insurance data with a brief statement from the director. The director said the yearly figures show “how day-to-day people are faring under changing economic conditions.”

The poverty rate rose from 14.3% to 15.1%. The new rate is the highest since 1993.
The number of people in poverty increased by 2.6 million. The total number now — 46.2 million — is the largest in the 52 years Census has been publishing such figures.
The percent of people in deep poverty, i.e., with incomes at or below 50% of the applicable poverty threshold,* increased to a record-high 6.7%.

As in the past, poverty rates were considerably higher in some population groups than others. For example:

It seems to me another arrow in the quiver of those of us who want Congress to pass the President’s jobs bill.

Yet the bill, as the President himself says, “can’t solve all our nation’s woes.” He’s referring, as White House communications indicate, to the dwindling economic security of the middle class.

The economic woes of low-income Americans pre-date the recession too. As the Center on Budget and Policy Priorities reports, the poverty rate has been rising for most of this decade — in boom years as well as downturns.

We’ll need a comprehensive strategy — and a smart one — to do something about this. We’ll need a broad-based commitment. Things as they are, I’m not holding my breath.
Posted by Joe S. at 4:39 AM No comments:

I observed some human interactions this weekend that made me sad; people treating others to the point of breaking them down to tears, some intentional and some perhaps not. When we communicate we remember only 7% of spoken words, we recall 38% of the tone of voice used and the greatest impression is 55% of body language displayed! Remember that words can hurt as much as sticks and stones!

It is a good thing to be focused. And it is a bad thing to be so focused that you lose sight of what you are focused on and that everyone around becomes a blur. I believe that part of the enlightenment is the experience of the lessons in the journey. Allowing others to participate (and accepting that they will NOT do it the exact way you would AND may in fact achieve the desired results. And then maybe they won’t.), helping others grow and learn helps us grow and learn as well.

Posted by Anonymous at 11:32 AM No comments:

Now that worship has ended let the service begin. What a great way to be mindful of one of the reasons to gather in community; to be reminded that the lessons we should be learning-we should be sharing (and not with just each other on Sunday!) Happy Sunday…